If you want to be the proud owner of this most prestigious SUV, talk to us first.. We are high-end car finance experts, and can put together a bespoke, flexible arrangement to suit your financial circumstances, your car, and your future needs.Our personal service means that we can take into account many more factors than a high street lender – for instance the car’s true residual value, other assets you may own or your business situation – and come up with a fast decision and a plan to suit you. We often offer lower payments than other lenders, and we can offer finance to clients who may be turned away by the computer-driven checklists of other companies. So contact us about finance, either before you start hunting for the perfect Bentayga, or after you’ve decided on your dream car.

Almost every sports and prestige car manufacturer now offers at least one all-wheel-drive SUV model in its line-up, or has one in the pipeline. Among the many is the Bentley Bentayga which came to market in 2016 and is currently the fastest, most expensive and most prestigious SUV in production.

With Bentley being part of the VW/Audi empire, the AWD Bentayga shares its basic architecture with the Audi Q7. Squint a bit and it’s not hard to see elements of the Q7’s silhouette in the Bentayga’s body, although with its Continental look-alike front end and accentuated rear haunches, the Bentayga’s imposing styling is unmistakeably Bentley.

The Bentayga’s 5-seater interior provides unparalleled comfort, luxury and technical sophistication. In optional 4-seater guise there’s even greater comfort for rear-seat passengers, although in this configuration the pair of reclining, massaging chairs don’t fold forward for increased loadspace. Standard equipment includes an 8-inch colour touchscreen infotainment system, a 60Gb hard drive, wi-fi connectivity and more, while among the options are a colour head-up driver’s display, a 2,000 watt Naim audio system along with a multitude of trim and finish alternatives. 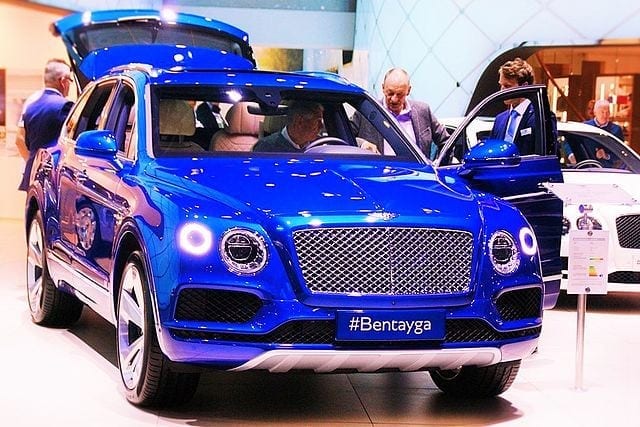