It has been almost three years since the referendum was held to decide whether Great Britain would break away from Europe, and the term ‘Brexit’ has firmly established itself since the vote on 23 July, 2016. Since then, a period of economic uncertainty followed – but that’s not the focus of this article. Instead, we are looking at the price development of classic cars at auctions since then, alongside changes in the value of the pound. 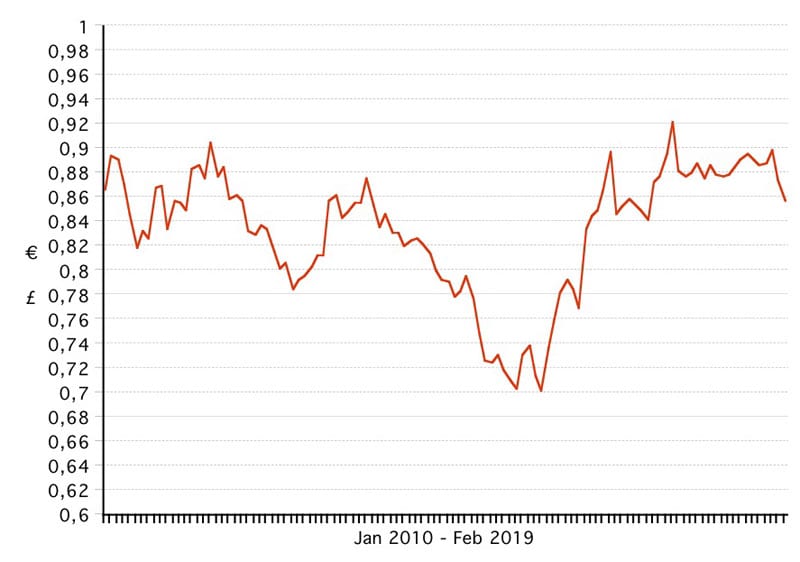 Exchange Rate: Pound Against the Dollar

After that, the exchange rate of the dollar fell during 2017 and increased in value during 2018. Compared to the dollar, the pound has dropped by about 14 percent since mid-2015.

Exchange Rate: Euro Against the Dollar

Finally, we look at the course of the exchange rate between the euro and the dollar. The graph shows that the euro has also become less valuable compared to the dollar. The first five years were erratic.

After a decline in value, a second erratic period started. The dollar has risen about 4 percent.

We can conclude that both the euro and the pound have dropped in value against the dollar since the summer of 2015, the pound the most.

A Bentley S1 Saloon LHD is more popular in Europe than a RHD, and conversely a RHD in the United Kingdom is more in demand than a LHD. This also applies to, for example, an ordinary classic Porsche 911. The French prefer to buy a LHD, just like the British prefer a RHD.

Therefore, the fall in the value of the pound will have limited impact on the price changes of these cars in their own market.

Exchange Rate: Pound Against the Euro

To begin with, let’s look at the exchange rate of the pound against the euro and the dollar (refer to the graph). Taking the monthly exchange rate from the year 2010, we see that the euro slowly became worth less compared to the pound.

For more than a year now, starting in September 2017, the exchange rate is at more or less the same level. The euro has not been worth much on average since 2010 and the pound has fallen by around 20 percent since mid-2015. 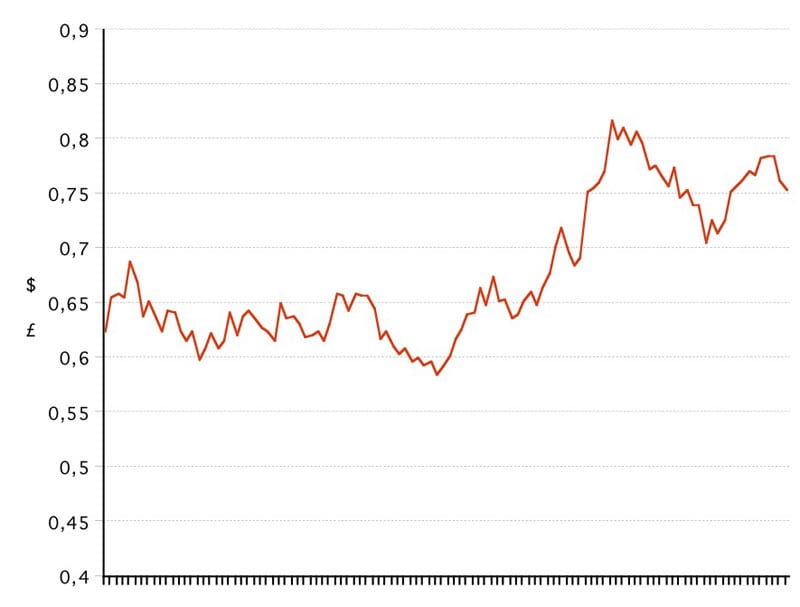 For special cars, the objection to the steering wheel on the ‘wrong’ side is less. It is for example a lesser problem to buy a Bentley 4.5-Litre or a classic Ferrari with the steering wheel on the ‘wrong’ side. These cars have more of an international price tag, whereby the LHD or RHD has less of an influence on the cost of such a car. However, a change in the value of currencies can have an impact on the price of such a car in its own market. 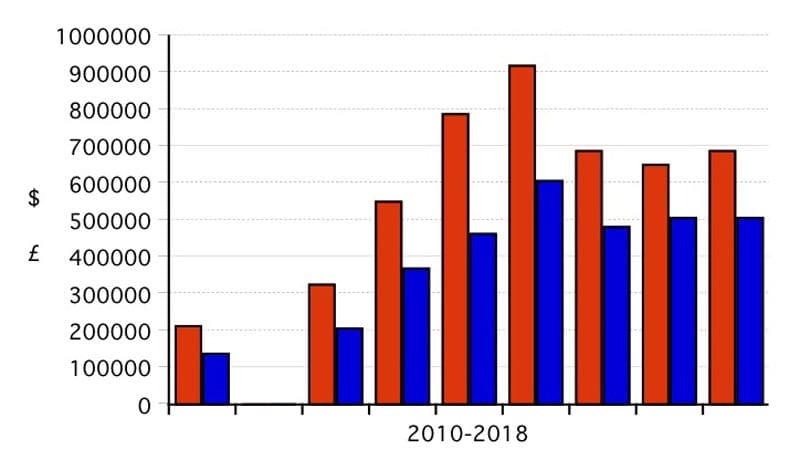 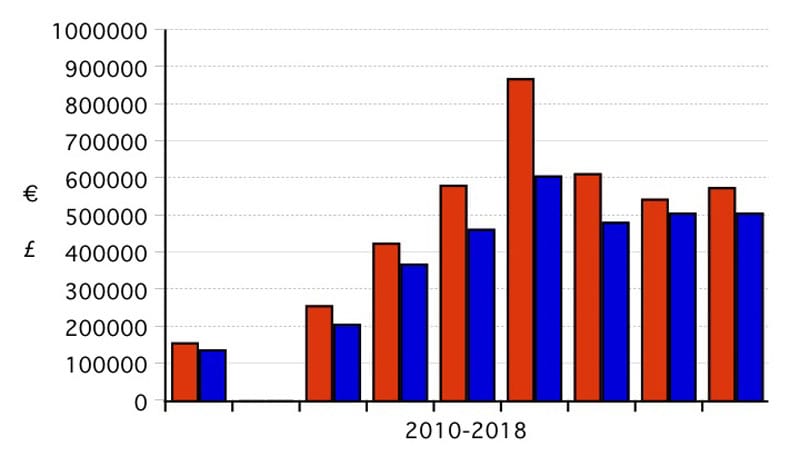 Many classic cars are sold in Britain by traders and auction houses, with an even larger number traded abroad. Just think of sales in the United States, in January (Scottsdale), March (Amelia Island) and August (Pebble Beach) or those in Europe, such as recently at Retromobile in Paris. Precisely because so many cars are sold at auctions outside the United Kingdom and higher or lower prices are realised there, it is interesting to look at the price development of cars in the different currencies.

Expressed in dollars or euros, a different picture of the price development of a car can be seen than expressed in pounds. To show this, the price development of six cars is shown in the bar graphs. The graphs are looking at data starting from 2010. As always, they show the highest auction results that were realised in a year. In the last five years, the vast majority of them have been reached in the United States, followed by France and Italy. Often the highest auction results were achieved in August in the United States. 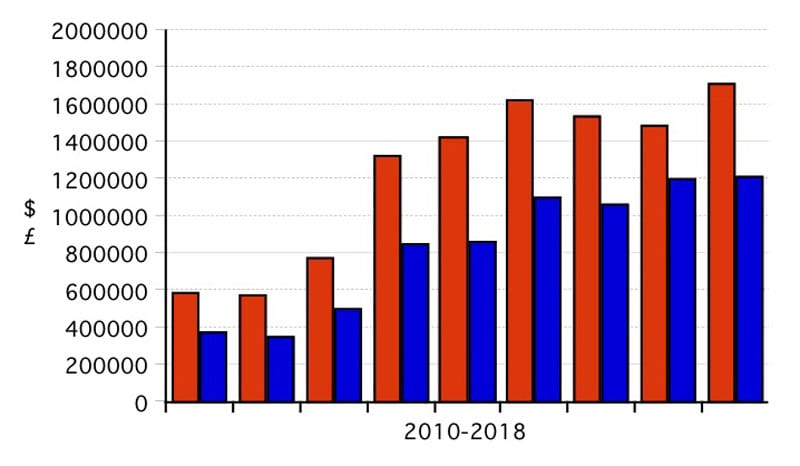 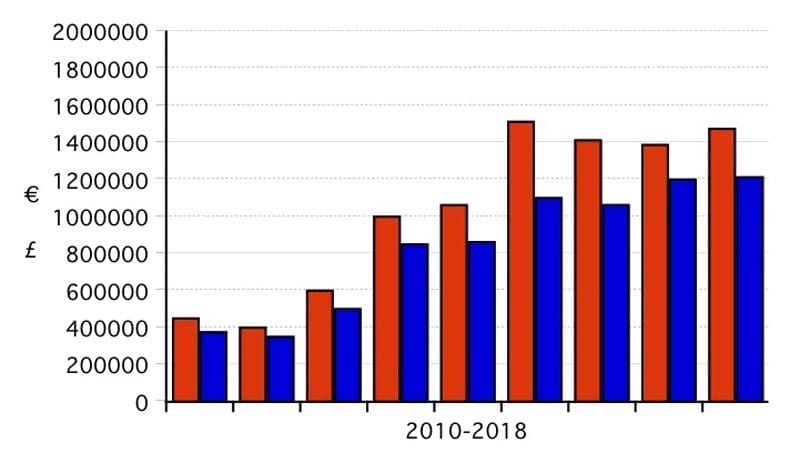 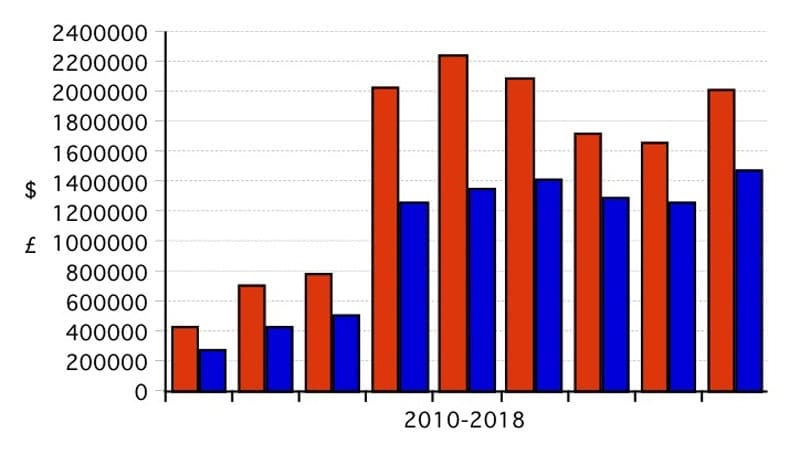 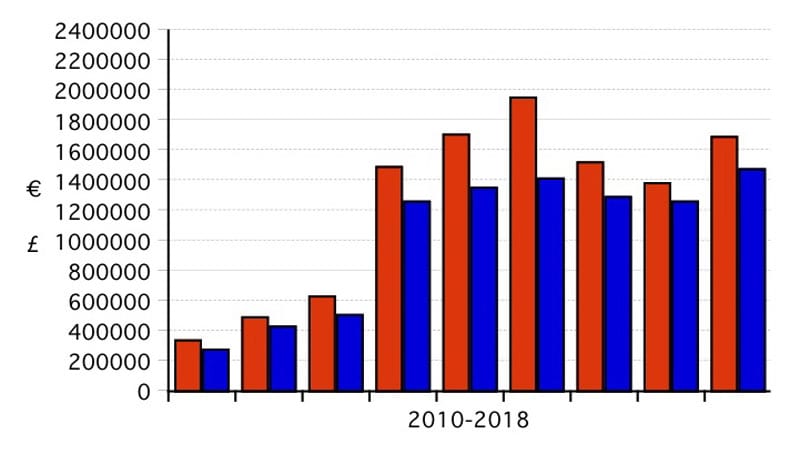 In dollars and euros the prices of these cars decreased at auctions starting from 2014/2015.

In 2018, the results of five of the six cars increased some what again at auctions. The trend that emerges from these examples is that the fluctuations in the price development of these cars in dollars and euros were larger than in pounds.

The fall in prices, particularly in dollars, was compensated in 2015 and 2016 in the UK by the fall in the value of the pound. In pounds these cars held their value better.

During 2017, the pound rebounded against the dollar (in a shorter period of time also against the euro). Small price declines of cars in 2017 in dollars, then lead to small price increases in pounds. The increase in value at auctions in dollars in 2018 was again compensated in this year by the fall in the value of the pound. As a result, the value of cars rose in pounds less than in dollars or euros.

The bar graph of the Aston Martin DB5 differs from the others. It should be noted that in 2016 and 2018 a RHD was auctioned as the highest. The value of this car is influenced strongly by this factor. 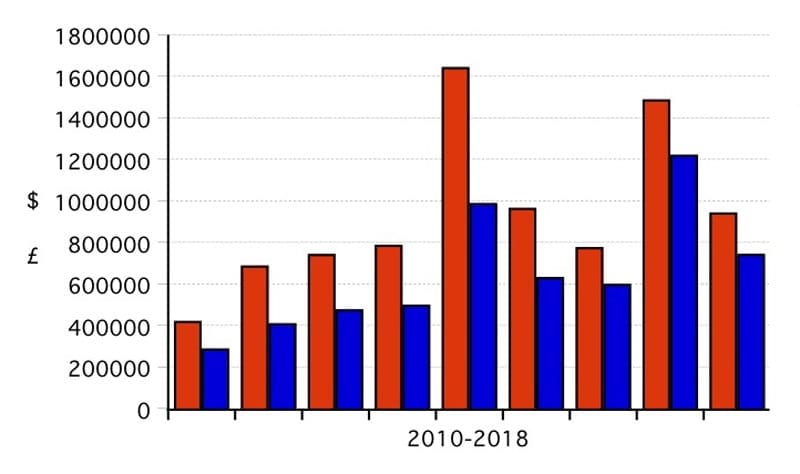 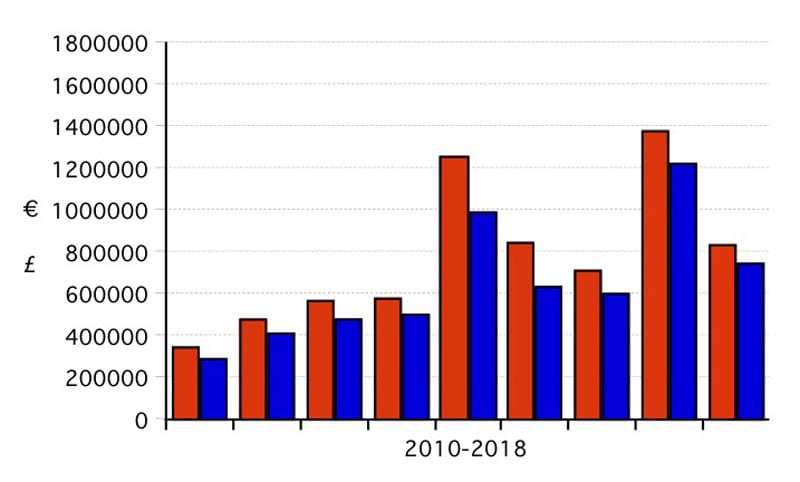 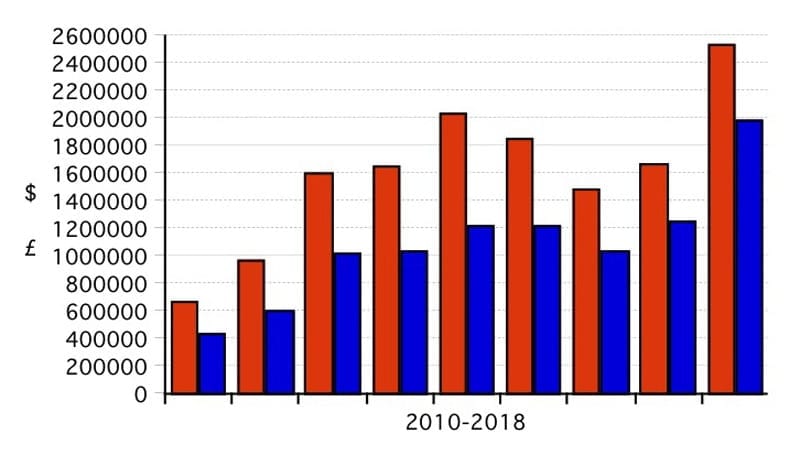 Highest auction results Mercedes-Benz 300SL Roadster in dollars (red) and pounds (blue). Not including the original Mercedes-Benz Artcurial auctioned in 2018 for £2,782,000 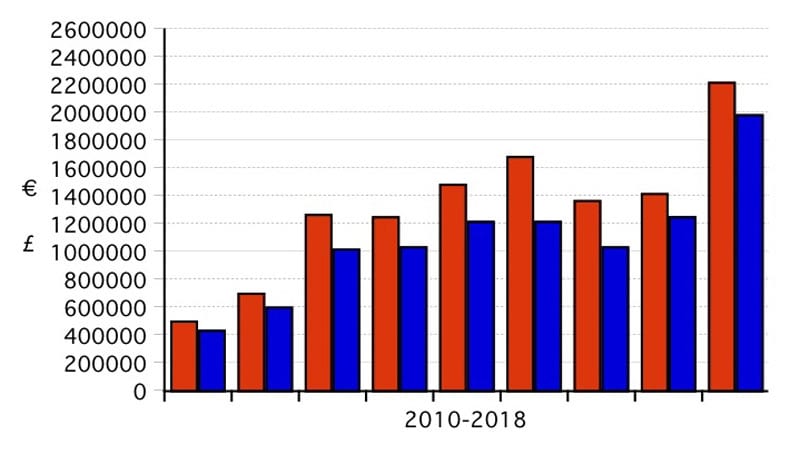 Highest auction results Mercedes-Benz 300SL Roadster in euros (red) and pounds (blue). Not including the original Mercedes-Benz Artcurial auctioned in 2018 for £2,782,000

Due to the decline in the value of the pound against the dollar and euro in the past five years, many products are more expensive to buy abroad. But it was not a steady drop in value, the exchange rate of the pound fluctuated against the dollar and the euro. Not only did the currency fluctuate, so did the prices of cars at auctions. Due to the fall in the exchange rate of the pound, the fall in prices of cars in pounds was somewhat muted. As a result, the prices of cars at auctions expressed in pounds were more stable than in dollars or euros. Expressed in pounds, the value of cars were more solid. 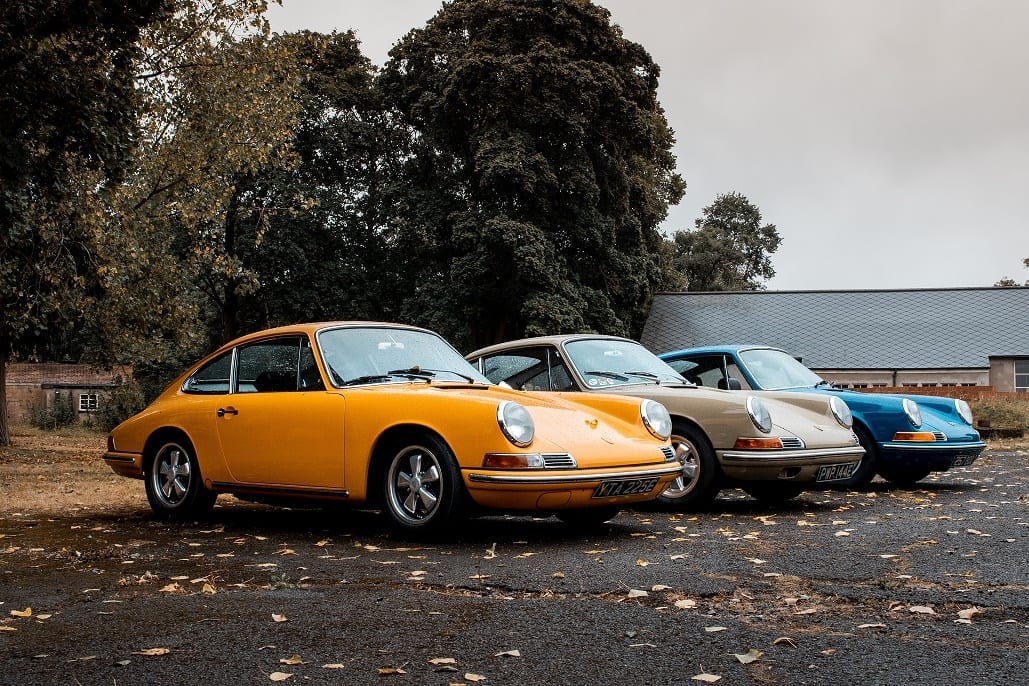 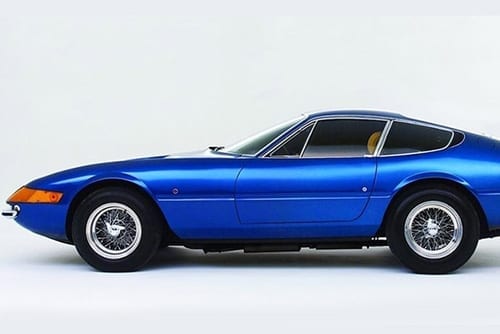 How To Maintain Your Classic Car