For Tom Stewart this is a first drive in more ways than one
; 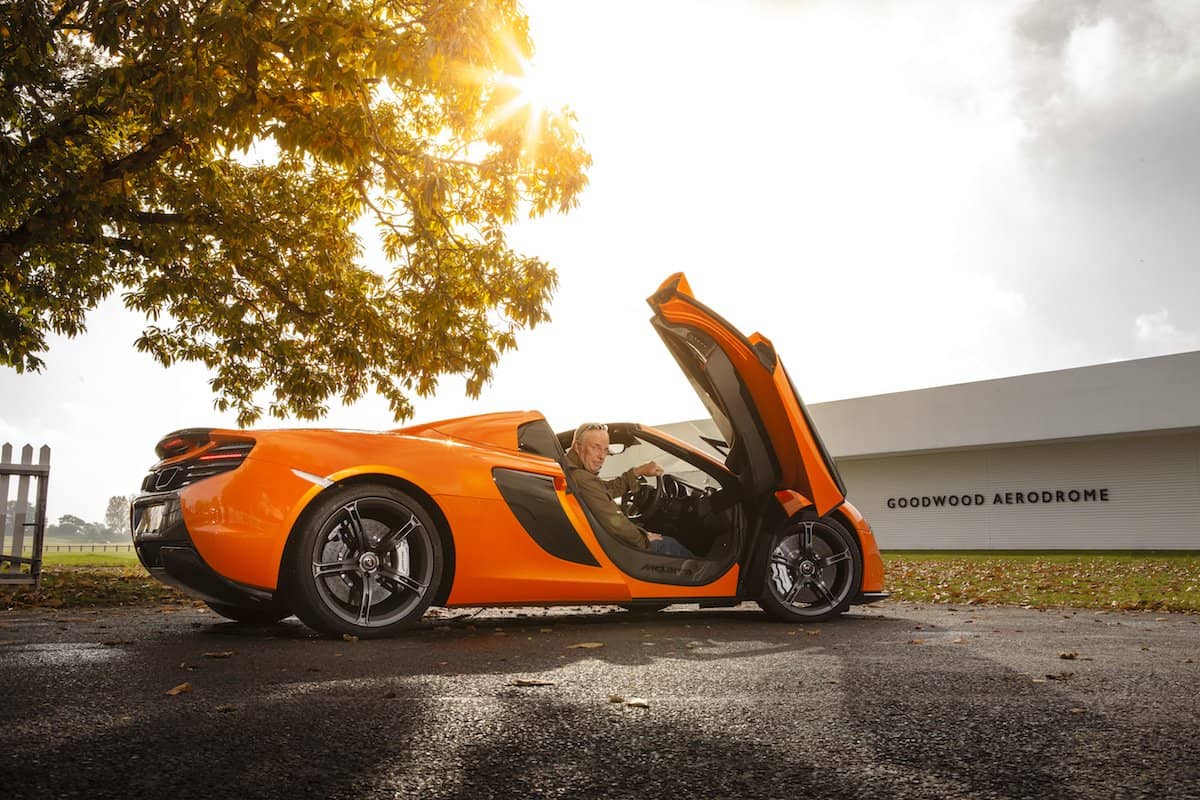 I confess. I‘ve been reviewing cars professionally for the best part of 25 years, and in that time I’ve been lucky enough to be behind the wheel of quite a few supercars including Ferraris, Lamborghinis and Porsches. I’ve also piloted Paganis, Koenigseggs, a Noble and even an SSC Ultimate Aero TT, albeit briefly, but never a McLaren of any description. Today, at last, my McLaren cherry has been popped, as I’m sitting in a 570S coupe facing down the iconic Goodwood circuit.

There were also a few variants of the Mercedes McLaren SLR. About 1,150 of those found owners during the 2000s, but although co-developed and built by McLaren in Woking, they were badged ‘Mercedes’ so they don’t count, not least because I’ve also not driven an SLR.

Then in 2011 McLaren Automotive launched the V8 3.8-litre twin turbo-powered MP4-12C. The ‘MP4’ part was a long-standing designation for McLaren Formula One racers, the ‘12’ referred to a complex performance index of Ron Dennis’ invention (the precise formula is no longer known), while the ‘C’ doesn’t stand for ‘carbon’ in reference to the car’s carbon fibre tub as Wikipedia might have you believe, but instead, I’m reliably informed, simply for ‘Car’ – another Ron Dennis initiative!

The 675hp 675LT (Long Tail) arrived in mid 2015 – I assume by now you’ve got the gist of McLaren’s revised naming system – and it was joined by the 675LT Spider earlier this year, along with the £126k (retail) 199mph 540C, McLaren’s most affordable model. All of which pretty much exhausts the list of McLaren road cars I’ve not driven.

However, following a recent invitation from the company to turn up bright and early at Goodwood in Sussex one morning along with an enthusiastic troupe of similarly virginal journo colleagues, my McLaren cherry has been popped.

I’m sitting in a 570S coupe (£143,250 retail), its semi scissor doors are raised and I’m receiving instruction on what’s what in the cockpit: engine modes, chassis modes, seat adjustment, paddle-shift/auto modes, McLaren’s number one satnav/infotainment system – there’s much to learn. I’m also impressed by the interior’s immaculate fit and finish, and I’m wondering whether it’s possible to get into a McLaren, or indeed clamber out, with any degree of elegance. Taking careful note of others’ ingress and egress through the day, it became clear that it isn’t. 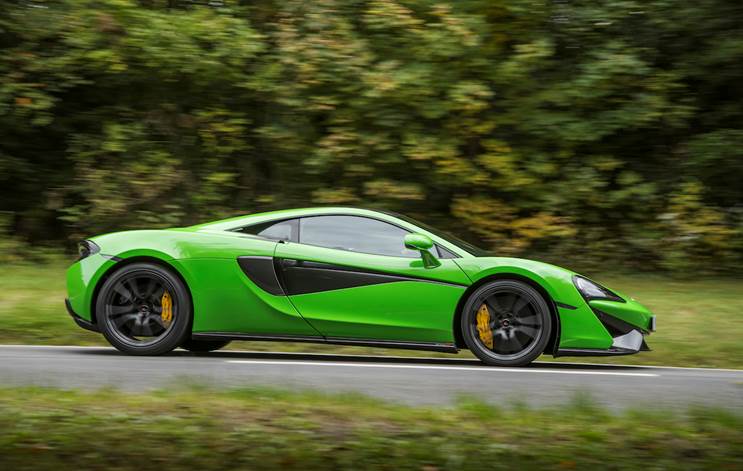 Before long I’m through the Goodwood circuit’s tunnel and out onto the public road. The surface is patchy damp, and inevitably there’s traffic too, but within a mile or so an open stretch presents itself and, if you’ll pardon the old cliché, I give it some beans.

The fat rear tyres scrabble for grip and I can feel the traction control kicking-in momentarily over the bumps, but the car tracks straight and true. I already knew the 570S could hit 62 in 3.2 secs and reach 204mph, but this is the kind of instant response and explosive acceleration that you’d never become blasé about. It forcefully pins you to the seat, and that with only about 50% throttle. Jeez this thing is perky.

Equally impressive is how mild-mannered it can be. It’ll crawl along in heavy traffic, trickle through sleepy villages or perform tight three-point turns without any bother at all. No popping and banging on the overrun, no stinky clutch, no rising temperature gauge, no high-performance histrionics. It’s well and truly sorted.

Road conditions don’t permit much in the way of enthusiastic cornering, but even without big lateral g the car exudes a real sense of solidity and security, while the steering’s feel and rapid response is nothing short of sublime. The ride is pretty firm but comfier than expected, although run over a small pothole or cat’s eye and you’ll feel and hear a sharp thud in the cabin.

Next to try was a 650S Spider, which retails at £215,250. This is a Super Series model, as opposed to the Sport Series 540C and 570S models, and though it looks similar on the outside and employs essentially the same twin-turbo V8, it’s a different car altogether. Different interior, different (active) suspension, increased downforce, less weight and, of course, an extra 80 horsepower resulting in a 3.0-second 0-62 time with a claimed 207mph max for the coupe, or 204mph for the Spider. 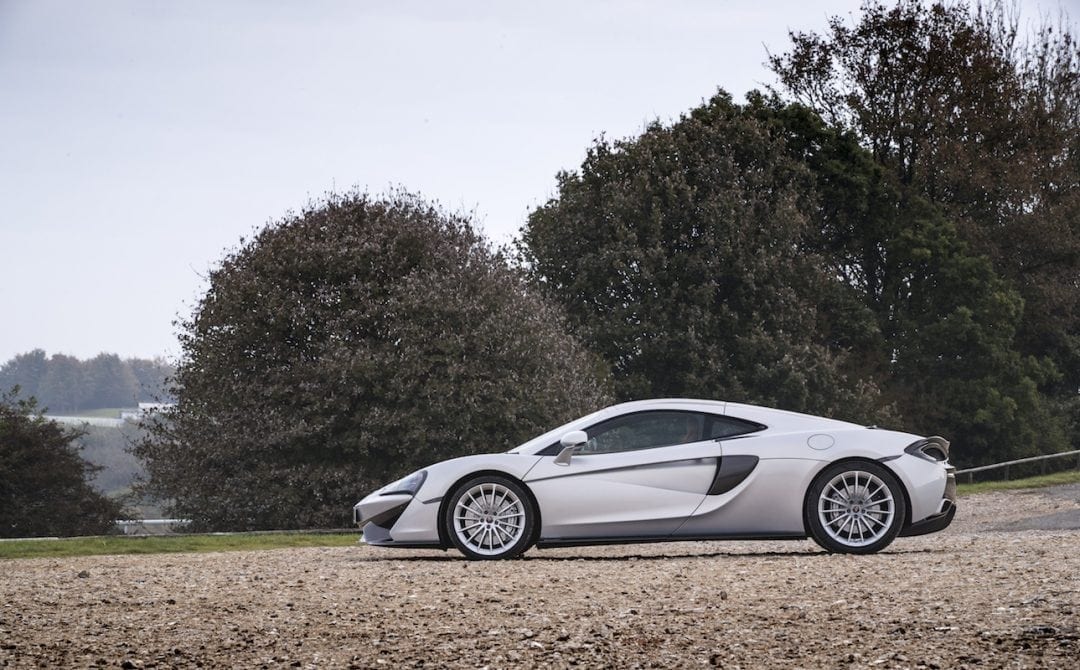 On a practical note, the Spider has no handy parcel shelf, but the 650S is every bit as together and refined as the 570S. According to McLaren it’s been “developed to give the enthusiast driver the ultimate in luxury, engagement and excitement…on road and track” and I can’t argue with any of that.

With the roof open I’m expecting a thunderous roar from behind, and with the engine under load at higher revs I certainly get it – along with stupefying acceleration – but at the same time the turbo V8 doesn’t provide the full goose-bump aural ecstasy of some non turbo supercars.

I was scheduled to drive just the 570S and 650S models, but with patience and persuasion I also manage a quick spin in a £154k 570GT. This is the most luxurious, refined and practical McLaren to date, and as such it has extra stowage space under the side-opening glass hatch, retuned (softer) suspension, slightly less pointy steering, steel rather than carbon-ceramic discs, noise-cancelling Pirellis, a fixed glass panoramic roof (as on the P1), a quieter exhaust and added noise absorption. In short it’s for touring, but it still has 570hp, will do zero-to-62 in 3.4 secs and hit 204mph, so it’s still pretty hard-core.

On the road the GT is noticeably quieter and the ride is that bit comfier, but it still thuds appreciably over cat’s eyes. Fortunately the steel disc brakes aren’t short of stopping power. Had I been in anything with less effective brakes then I might well have smashed head-on into a 7-tonner overtaking two cyclists on my side of a narrow road.

And so, with that buttock-clenching moment behind me my day was done and my McLaren cherry well and truly popped. The three cars I drove are all quite brilliant; little wonder that the firm is on course this year to more than double its 2015 UK sales from 150 to a likely 360, with an aspirational forecast of 500 for next year. But of the three, and probably of all in the current range, I’d plump for the 570GT – an entirely personal choice.

Now, if anyone has a Bugatti they could lend me? An EB110, Veyron or Chiron?

Ultimate Guide to Buying a Porsche 997 All You Should Consider Before Purchasing a Porsche 997 The relative understatement of a Carrera 4 bodyshell, blessed with more power and torque and one of Porsche’s finest manual shifters, the 997 GTS is a sleeper and a keeper....