The McLaren 540c, although it is considered as the entry-level McLaren, the 540c feels no less complete or exhilarating than the incredible 570s.
As a specialist McLaren finance provider, we can reassure you that you are knocking at the right door. With the most flexible and bespoke finance options in the business, we understand your requirements and tailor finance to your circumstances, your car and your future needs. 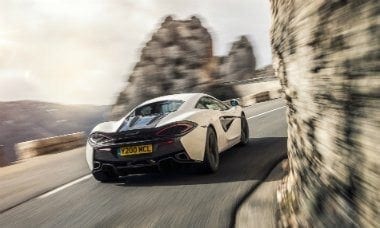 Having concluding that McLaren needed a more attainable entry-level car, the Woking firm launched the 540C Coupé at the Shanghai motorshow in April 2015. With customer deliveries commencing in early 2016, it was the second model to join what’s now become a four-model Sports Series line-up. The McLaren 540c price is around £126,000.

The 540C shares the 570’s carbon fibre ‘MonoCell II’ tub which, with larger door apertures than the earlier 12C, 650 and 675 models, makes getting in and out that much easier. The 540C also has the 570’s aluminium body and double-wishbone suspension with front and rear anti-rollbars and independent active dampers offering Normal, Sport and Track settings, but the 540C’s dampers are tuned differently with a greater focus on day-to-day driving on normal roads.

The 540C’s floating centre console, dash and interior is also common to the other Sports Series models, but in addition to price, engine output and damper tuning, there are a few other subtle differences. At 1,313kgs the 540C weighs 2kgs less than the 570C, and it has its own cast alloy wheels shod with Pirelli P Zeros. (The 570s come with P Zero Corsas). The 540C also has iron rather than carbon-ceramic brake discs and a slightly different rear diffuser.
According to Evo (Oct 2016), “As fast as the Porsche 911 Turbo is, and as wonderful as the Audi R8’s V10 engine is, neither offers the same level of connection and interaction that the 540C does”.