In early December 2018 RM Sotheby’s announced that it would be offering a private collection of over 140 modern classics and future collectibles, mainly from the 1980s, 1990s and 2000s. This so-called Youngtimer Collection would be offered across four RM Sotheby’s sales held in Paris, Amelia Island, Fort Lauderdale and Essen during February, March and April 2019.

Included in the Swiss, single-owner collection were 34 Mercedes (including 13 pre-merger AMG models), 27 BMWs (inc. 12 Alpinas), 12 Rolls-Royces, 11 Bentleys, eight Porsches and Jaguars, seven Ferraris and four Aston Martins. Japanese marques were well represented with Acura (Honda), Datsun, Mazda, Mitsubishi, Nissan and Toyota, along with the occasional Audi, Cadillac, Chevrolet, Lamborghini, Lotus, Mini, Morgan, Range Rover, Renault and Weismann. Importantly, for the most part the cars were low mileage, expertly cared for and in very good condition. Two thirds of them were originally catalogued as being offered at no reserve, but this proportion later increased to 80%.

Unsurprisingly this unique consignment generated more than the usual amount of pre-sale publicity with automotive websites and social media feeds all going gaga at the prospect. Top Gear’s Chris Harris travelled to a warehouse in Switzerland to view the collection before it was split up and was reportedly so taken aback he became “temporarily paralysed by Optic Nerve Overload”!

With the Youngtimer cars being offered alongside RM Sotheby’s 663 other four-wheeled consignments over the four sales, we thought it’d be interesting to see how they fared relative to the other classics. Would we witness the beginnings of a market shift toward more contemporary collectibles, and would there be any conclusions to be drawn?

(All sales figures quoted are inclusive of buyer’s premium.)

See How You Can Get Auction Finance >>

Prices were strong across the 25 Youngtimers offered at the central Place Vauban venue. All but one car found a new home, with 60% of them going for sums within or above their estimated figures. Numerous new benchmark figures were also achieved thus indicating a possible shifting of collectors’ tastes. 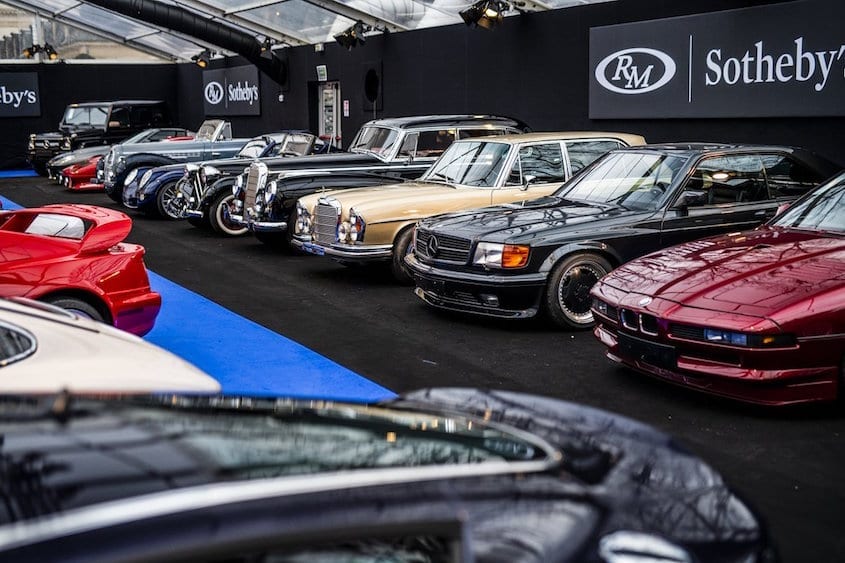 The first Youngtimer offered, a Mercedes-Benz 560SEC AMG 6.0 ‘Wide-Body’ (lot 122) provoked a long bidding contest and eventually sold, almost doubling its low estimate in the process to set a new world auction record for the model. Other strong performers included a Porsche 928 GTS (lot 132), an Audi Quattro (lot 154), a Mercedes-Benz E500 Limited (lot 184) and a BMW Alpina B12 6.0 (lot 186), all of which also comfortably surpassed expectations.

Among those that fared less well were a BMW Alpina B7 S Turbo (lot 174) which sold for a surprising €62k short of its lower estimate, and a Morgan Aero Supersport (lot 176) which failed to meet its reserve price. 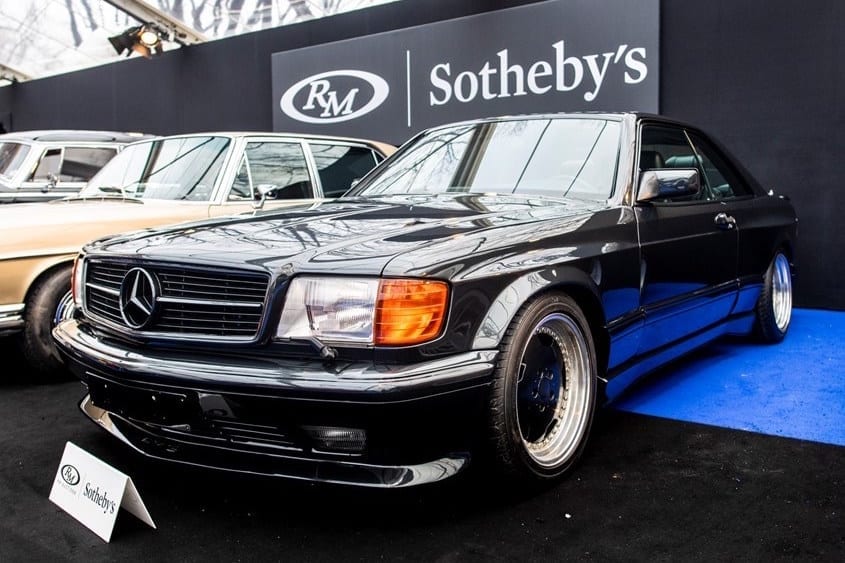 Among the 142 cars catalogued for this two-day sale were ten from the Youngtimers collection, all of which were offered and sold on the first day.

The very first lot, a Mazda RX-7, set a record for the model at auction, and then every other Youngtimer offered bar a Merc 560SL (lot 104) either met or exceeded its estimate. Another Merc, a 560SEC AMG 6.0 (lot 105), made mincemeat of its high estimate and this was immediately followed by a highly original Toyota Supra Twin Turbo Targa (lot 106) which sparked a contest between numerous bidders in the room and on the phones and eventually achieved a record $173.6k. 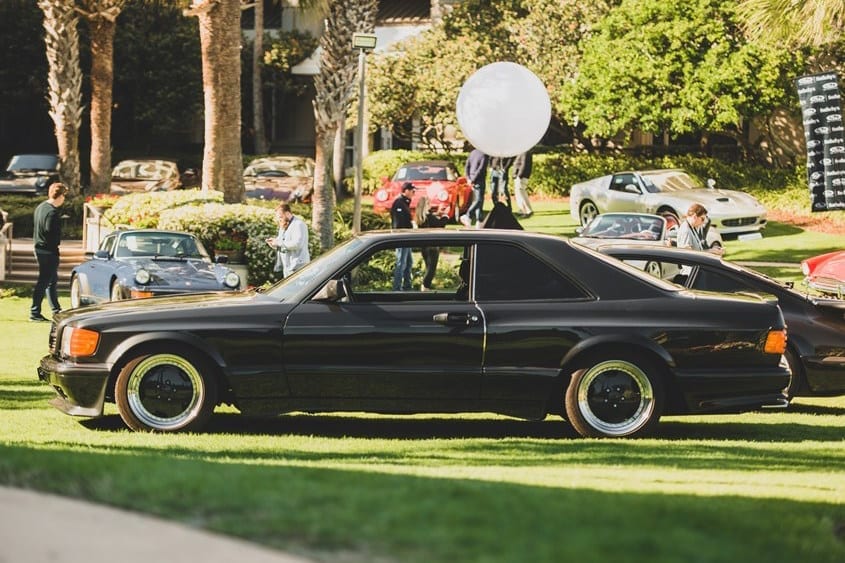 Nineteen Youngtimers were sprinkled among the 368 cars offered at this two-day marathon and all were sold, with a dozen of them exceeding their pre-sale expectations. 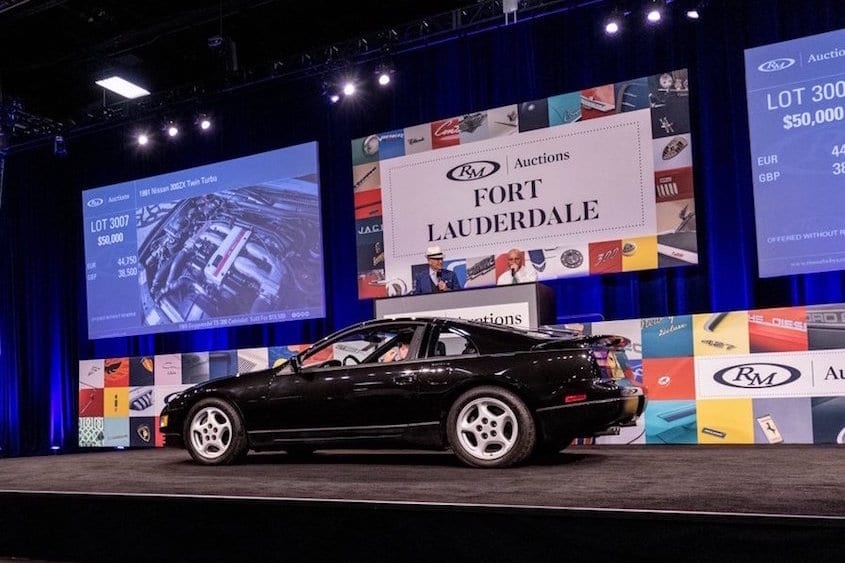 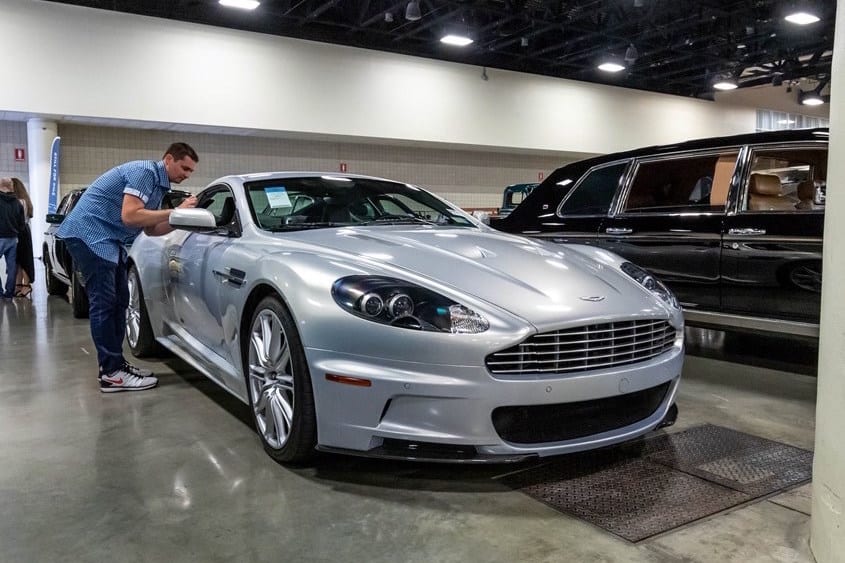 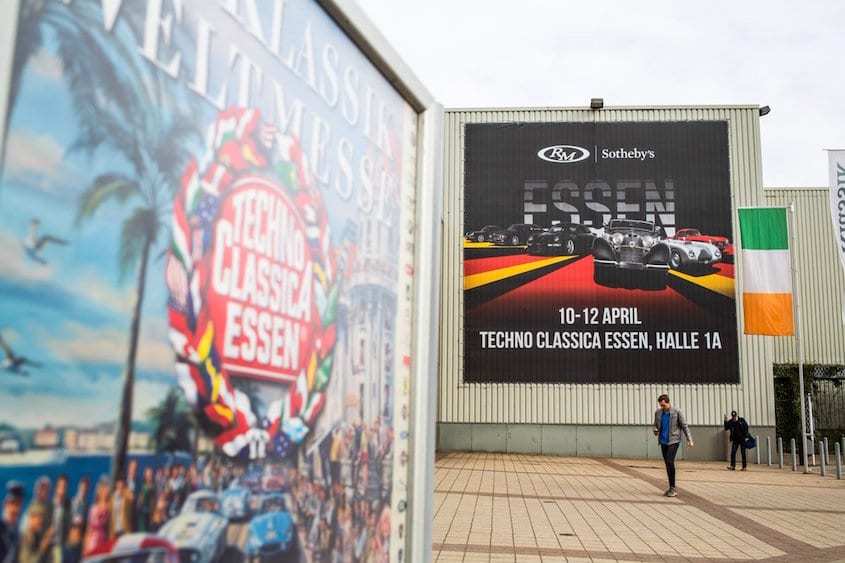 With RM Sotheby’s holding a sale at the Techno-Classica show for the first time, almost two-thirds of the original Youngtimer collection was offered at this one auction, with the collection comprising over 40% of the entire sale.

Thus far, 53 of the 54 Youngtimers offered had been sold. To ensure an even better sell-through rate, it was announced three days prior to the sale that the Youngtimers would be offered “entirely without reserve”. So, of the 90 cars to be offered, almost a third of them which previously had a reserve figure now didn’t, and with reserves no longer part of the equation every Youngtimer was effectively guaranteed to sell. 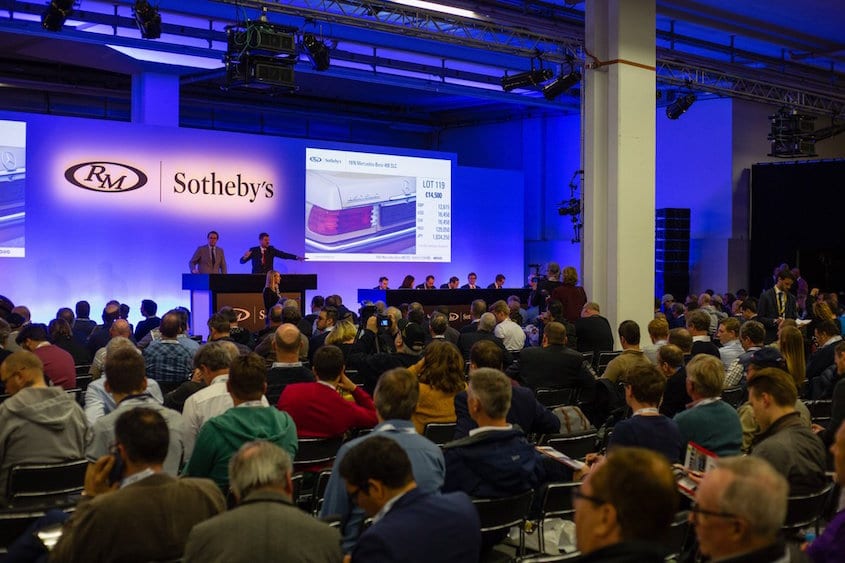 A Merc 560SEC cabrio conversion (lot 117) went for more than double its high estimate, while another Merc 560SEC AMG 6.0 ‘Wide Body’ (lot 137) which previously had a reserve sold for almost €30k above its high estimate. Others going for strong money included a Rolls-Royce Silver Seraph (lot 165) and a 1992 Range Rover (lot 168).

Among the underperformers was a Datsun 280Z (lot 171) which didn’t even get close to its low estimate, a similarly-afflicted BMW M5 (lot 144) and, most notably, a BMW Alpina B7 Turbo/1 (lot 141). Selling for £29k under its low estimate, the B7 was one of the four Youngtimers sold on the Thursday which had previously had a reserve… 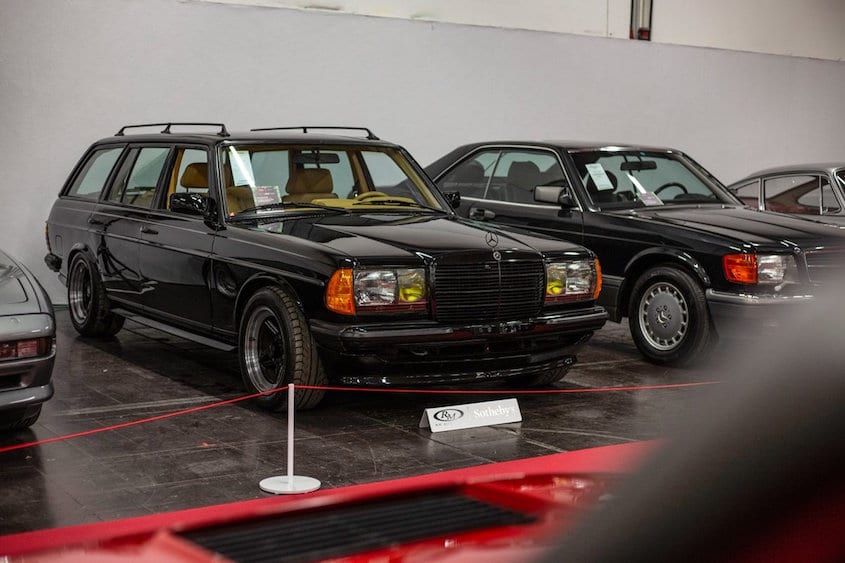 The Friday at Essen saw more than ten bidders raising their paddles for the Mercedes 500 TE AMG wagon (lot 297) – perhaps the most highly anticipated lot of the entire collection. It eventually more than doubled its pre-sale estimate and established a world record for the model. Similarly, a 1984 Merc 500 SEC AMG 5.4 ‘Wide-Body’ (lot 298) also ignited a bidding battle on the second day, also achieving a new record price. 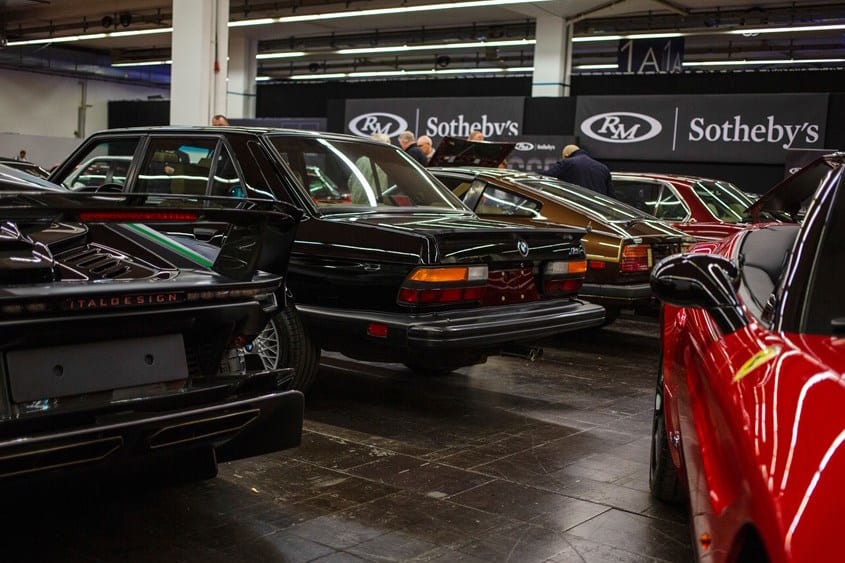 That one unsold Youngtimer – the 2015 Morgan Aero Supersport (lot 340A) offered in Paris over two months earlier? It reappeared at Essen, and now unencumbered by a reserve figure it sold, albeit for over €60k less than its original low estimate and over €20k less than had been bid for it in February. 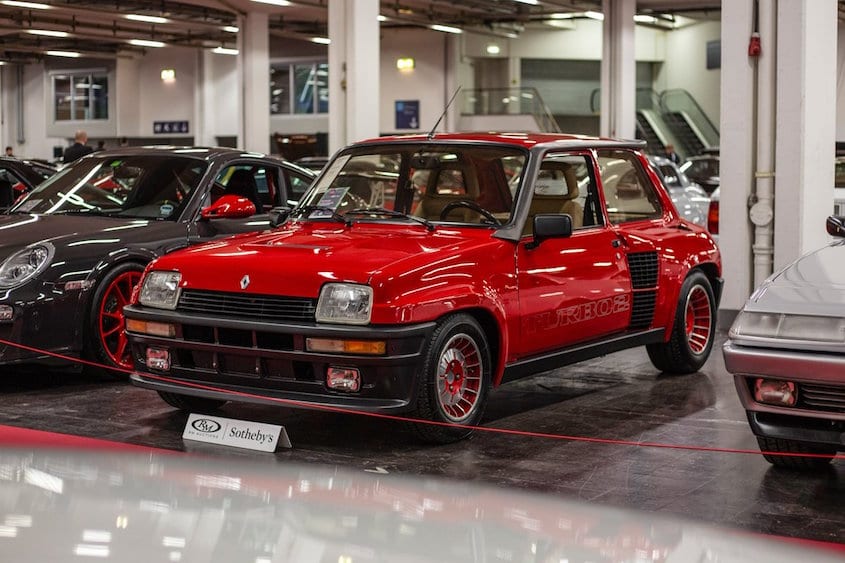 ** Also no reserve but not originally catalogued as such

So what may we deduce from all this?

The Paris and Amelia Island sales featured the higher value Youngtimers, while both the Florida sales managed to shift a higher percentage of the Collection at or above their pre-sale estimates.

With the highest volume of Youngtimers (all at no reserve), the lowest average value and the lowest percentage sold at or above their estimates, the Essen Techno-Classica sale was a largely a case of pile ‘em high and sell ‘em cheap, at least as far as the Collection was concerned.

So are we seeing a rapid market shift toward more contemporary classics? Well, every car in the Collection was sold, but then the 80% of them offered at no reserve were effectively guaranteed to sell. That said, a majority (58%) of the Collection sold within or above their estimated price ranges so, 1980s-1990s models are certainly becoming more sought after and valuable. This is perhaps best confirmed by a youngtimer not part of this Collection – a 1985 Lancia Delta S4 Stradale (lot 257) with a €450-550k estimate which sold at Essen for €1,040,000.

And therein lies the main lesson. As has been the case for some years now, it’s only the exceptional and outstanding cars that command top money and prove to be the sounder investments, whether they be young or not so young. 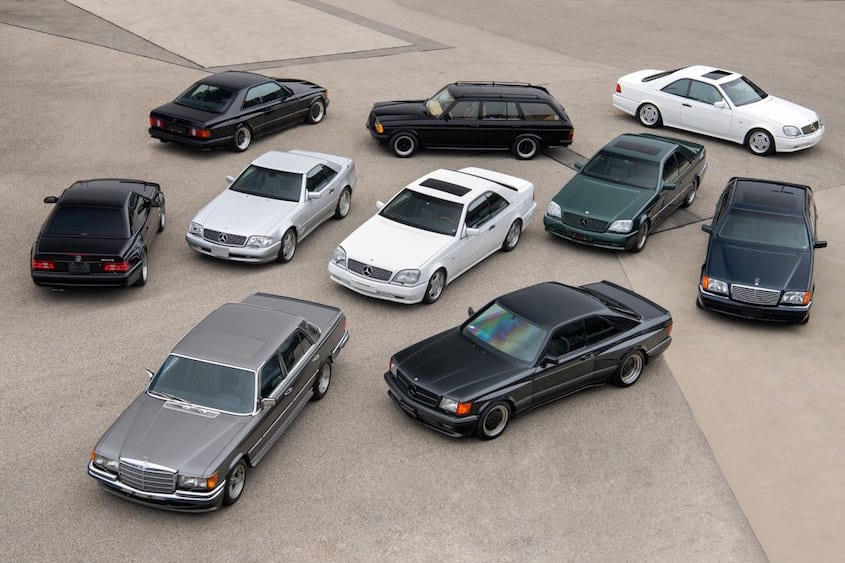